No relation to the current mayor 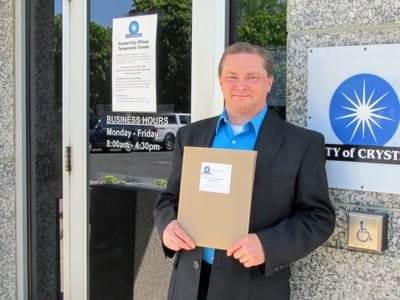 Steve grew up in Pierre, SD. Pierre is the second smallest state capital city in the country, and being such a small town, state government and government in general is very front and center. The primary school system consequently was very strong in its civic teachings, and field trips to government offices were an easy inclusion to curriculum. This early introduction and constant exposure to state government while growing up has made an impact on Steve's understanding and knowledge of how government works.

Steve's career includes managerial roles in automotive, retail, and customer service. Steve is a small business owner. In 2017 he started Crystal Auto Spa where he did paintless dent repair, minor auto body work, and auto detailing out of his garage. In 2018, he purchased Newport Collision Center and moved his operations there, retaining the staff and strengthening the business.

Steve and his partner, Heather, moved to Crystal in 2013. Even though Steve now has a long commute, he has made ties with the community and couldn’t see himself living anywhere else.

Why vote for Steve? Here is where he stands on a few of the matters that have impact on the city:

Strategic Financing – 9% property tax increase and a ballooning water bill are unacceptable; we need to leverage the tools of good strategic financing so we aren't burdened by paying for everything up-front

Community Policing – continued focus on positive interactions with the public

Separation of Church and Government – will represent the values of all residents, no matter your affiliation or creed

Help build excitement for Steve's campaign by displaying his sign in your yard!

Your financial support helps to cover expenses for printing, signs, and advertising.

Help Steve be a true representative of the people by sharing your thoughts in his survey.